Downtown Winston-Salem Partnership’s Restaurant Week 2016 is this week and will end on Sunday, February 28. Restaurant Week 2016 will feature a prix fixe menu of downtown restaurants.
Restaurant week is a way to showcase downtown Winston-Salem and how the food scene here is up-and-coming. For chefs, the opportunity to create something unique using fresh and local products is a challenge and a way to highlight their abilities and the resources for restaurants that exist right here in town.

To find out participating restaurants and their specials visit – www.downtownws.com/restaurant-week

Are you ready? Super Bowl 50 is here!

SANTA CLARA, Calif. — Finally, the day is here. It’s time for another Super Bowl Sunday, and this one is a doozy.

Super Bowl 50 will kick off at Levi’s Stadium in Santa Clara, California, at 6:30 p.m. ET (3:30 p.m. local time). It’s a stellar matchup between the Denver Broncos (14-4) and the Carolina Panthers (17-1), pitting the No. 1 defense against the No. 1 offense, respectively. The Broncos got here by winning the AFC Championship Game 20-18 over the New England Patriots, while the Panthers won the NFC Championship by beating the Arizona Cardinals 49-15.

Lady Gaga will sing the national anthem. The halftime entertainment will be headlined by Coldplay. Beyonce and Bruno Mars also will join the show. While she isn’t the headliner this year, it will be the second Super Bowl halftime show for Beyonce, who was the featured entertainment in New Orleans at Super Bowl XLVII. But let’s hope this year’s show doesn’t have any malfunctions. After her performance in 2013, half of the lights at the Superdome suddenly went out. It’s also the second halftime appearance for Bruno Mars.

Carolina is favored to win Super Bowl 50. That’s because the Panthers’ offense, led by superstar quarterback Cam Newton, led the NFL with 31.3 points per game in the regular season. In the playoffs, the team has averaged a staggering 40 points per game. Newton, who won the NFL Most Valuable Player Award on Saturday, led the regular season with 45 total touchdowns (35 passing, 10 rushing) and became the first player in NFL history with at least 30 passing touchdowns and 10 rushing scores in a single season.

“I keep saying it: We’re not finished,” Newton said.

There’s no other quarterback in the league with the skills Newton has. No one has more combined rush and passing yards than Newton in a player’s first five seasons. He’s the only player in NFL history to have five seasons with 3,000 or more passing yards and 500 or more rushing yards at any point in a career. There’s little doubt that Newton has a bright future.

But don’t count out the Broncos. They led the NFL in total defense, pass defense and sacks in the regular season, and they still have quarterback Peyton Manning, who will one day have an induction date for the Pro Football Hall of Fame in Canton, Ohio. This also could be Manning’s last game of his storied career. When the Broncos defeated the New England Patriots to reach the Super Bowl, NFL Films picked up audio of Manning telling Patriots head coach Bill Belichick at midfield, “This might be my last rodeo.”

However, it has been the defense, not Manning, that has carried the Broncos this season, and it has helped them win several close games; Denver went 11-3 in games decided by seven points or less, including the AFC Championship Game against the Patriots. Additionally, the Broncos defense gave up more than 30 points just once this season, against the Pittsburgh Steelers in week 15.

“The victory in the AFC Championship Game was a great example of what this entire season has been like,” Manning said. “It hasn’t been easy. It’s been a lot of different people stepping up and doing their part at different times. That was a unique football game but everybody did their part and it truly was a team game.”

Manning, at age 39, had one of the worst seasons ever for a quarterback who is starting in a Super Bowl. He threw nine touchdowns and 17 interceptions in 10 games during the regular season. Manning also missed six games this season with a partially torn plantar fascia in his left foot.

But Manning’s mind is as sharp as ever, and he showed against the Patriots that he has something left physically, throwing two touchdown passes. Before that game, he had only thrown for one score at Sports Authority Field at Mile High all season. He’ll need to produce better results than his regular-season numbers for the Broncos to be competitive in this game.

It also should be noted that the Vince Lombardi Trophy — the trophy awarded each year to the winning team of the Super Bowl — is silver. To commemorate the “golden” year, the NFL commissioned Tiffany & Co. to handcraft the 50 to accompany the trophy. Each number is cast in bronze, plated in 18 karat gold and weighs nearly 33 pounds. The gold 50 has appeared alongside the Vince Lombardi Trophy all season. It will be presented on Monday at a press conference to the Super Bowl MVP and winning coach.

I think I want these two tickets in Section 111! Hahaha. 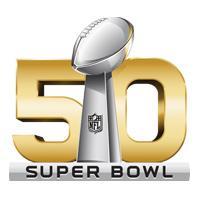 New this year is a limited edition participant kit, Tropicolor Zone™ on course, and an amped up finish festival featuring Rainbow Beach, music, dancing, photos, and more! For more info, visit the website.

WHAT IS THE COLOR RUN™?

The Color Run, also known as the Happiest 5k on the Planet, is a unique paint race that celebrates healthiness, happiness and individuality. Now the single largest event series in the world. The Color Run has exploded since our debut event. We have more than tripled our growth, hosting more than 300 events in 50+ countries in 2014.

We love chucking paint and making people smile, but we also think it is important to give back. As a for profit company, we are excited we have the opportunity to partner with charities and help shine a light on their extraordinary work within society.

We are thrilled to be working with LAMB Foundation of NC.

The LAMB Foundation of NC is public 501(c)3 not-for-profit charity dedicated solely to assisting people who have intellectual disabilities within the state of North Carolina. For more information visit http://www.lambnc.org/

Please email us at charity@thecolorrun.com for additional information or for inquiries about working with us.